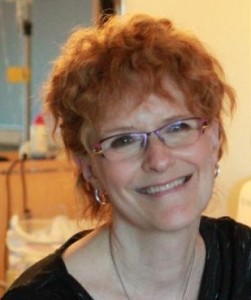 Pam had dreams of writing something great, preferably as monumental as Huckleberry Finn or The Yearling, since she was in her early teens. Did she raise the bar too high? She thought so, and maybe that’s why she’s just getting started. She recently read a quote, “If not now, when?” and regrets she didn’t see that 50 years ago. But she’s writing now, a memoir, and having great success through writing classes with Maureen, so she’s not ruling anything out. Pam earned her living as an executive assistant (read ‘secretary’), an English teacher, and an educational coordinator for a residency training program. She hopes one day to be a stand-up comic.

A Sample of Pam’s Writing

I knew I had her things, but had forgotten about them until I moved to my own little house, my sanctuary, where my things were to make my home. Determined to stomp my roots deeply on this new ground, the tenth move in as many years, I vowed to polish all the dusty, tarnished silver objects I had, just a few a day, to display in a china cabinet finally out of storage.

Young couples today don’t waste time keeping silver shiny. They don’t want to own any. I mused about this and other changes of time and circumstance as I stood at my kitchen window, polishing away.

A few days into the silver, I absent-mindedly rubbed polish on a small spoon. Glancing down, I saw I was holding an ornate, curlicued sugar spoon with an engraved “D”, and realized I couldn’t recall her last name. A spoon from The Butchart Gardens had an engraved rose. The Canadian maple leaf added color to another; an Indian totem dangled atop the one from Alaska. The spoon from North Dakota depicted a lone bison. From Norway there was a tiny fork, intricately designed; a plain spoon was simply stamped “Seattle.”

I knew they were hers. Her spoons in my house, at my window, not part of my life then or now. But I held them with reverence and attention, thinking about who she was, the places she’d bee, what she held dear. Her memories.

I did not know her. She was Jimmy’s third wife. He told me about her once, showed me her picture. She had a short cut with bangs, a pleasant, full face. Her smile was tentative, as though she was telling the photographer she wasn’t going to fall for any “say cheese” fakery. No wonder. She was enduring an illness, discovered shortly after their marriage. He had loved her, nursed her for six year, lost her.

He raised the picture high, took a long look, and sighed, “Oh Cynthia!” then put her back in the drawer and made pesto for me.

This is the rest of what I know about her: her parents visited them just once, and he’d offered them cream for their coffee. They declined, yet he saw their hesitation. “Come on,” he insisted. He made the best coffee, roasted the Bella Carmona beans to perfection. Drinking it was to be savored, experienced, loved. “Yes,” they finally agreed, “but you pour it.” He told me this little story with exasperated wonder. “Can you believe it? Denying themselves a little cream in their coffee, as if they didn’t feel worthy of cream!”

We savored his pesto, experienced it. I felt loved.

He died too, of cancer, and when the dust had settled—the unsettled dust really—I had Cynthia’s things. Her Bible, recipe box, a few trinkets of jewelry, spoons. Jimmy’s three daughters from his first two marriages weren’t all that fond of her. They were in their teens at the time she was in their dad’s life. Her parents were elderly when she died long gone now, 20 years later. She had no siblings.

Who is here to remember her now? Only me, at my kitchen window, polishing her silver spoons, the rare, untarnished memories of her, residing in my little house.

What Pam says about WordPlay

“I “discovered” Maureen surfing on the Internet (picturing her now on a surfboard, riding waves of words with wild abandon!). Was it just plain luck that led me to that first class? Or some divine plan? Whatever it was, I am very grateful. I was looking for a way to cope with the overwhelming emotions of loss, and didn’t know where to start. I sensed that writing would help, but knew I couldn’t do it in a solitary place. I needed a guide and fellow travelers, a place to feel safe. Maureen’s workshops and retreats gave that to me. Her teaching gifts, combined with the love she brings to every class, have helped me move forward and challenged me to dig deep as I work toward becoming a writer.”