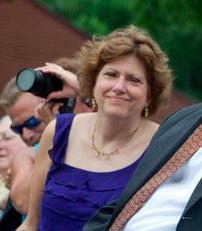 After high school, Carol had hoped to go to a good journalism school in a warm climate. Her father wouldn’t let her apply to Stanford because it was too far away from her Maryland home. An out-of-state student, she wasn’t accepted at UNC-Chapel Hill. So her writing career took a long detour when she went to Duke and majored in Economics, worked for a bank in Atlanta, and then was welcomed into UNC’s MBA program. She worked in banking for 12 years, birthing three children along the way. The third child was her excuse to escape her banking career, but she needed another income source. “What am I good at?” she thought. Her bank jobs had included a lot of communications, keeping project teams on track with memos and meeting minutes, then reporting on the budget of the operations subsidiary. So in her 40s, she launched herself as a freelance copywriter. Later she partnered with web and graphic designers working from home to form a small marketing company called Smart Stuff, creating web sites and marketing collateral.

On the more literary side, Carol would pen an occasional poem. Then, during a life transition, Carol took a variety of Wordplay classes, and kept her writing skills honed by writing a blog called “free for all; history as spirit unfolding.” She also got her credentials as a grant writer and tried to start a freelance grant-writing business, which went nowhere. After moving from Charlotte to Hillsborough, she opened a store called Nature’s Way. There she sells native plants, antiques (recycled home furnishings!), natural and locally made products, and benches she makes with reclaimed wood. The store is her way of helping others learn about creative, earth-friendly products and practices. Selling her first children’s book, Frog Travelogue, face-to-face to her customers has been lots of fun. A second book for older children and maybe even adults is in the works.

A Sample of Carol’s Writing

Carol starts out her book with a page about how it came into being, which is also a mini-lesson in real frog behavior — and the value of curiosity — for kids (and adults!):

Frog Travelogue is a story about frogs finding this pond (yes, there’s a real photo) in my backyard. I had read in a book that frogs would come to my pond. But where would they come from? How would they get there? How would they even know I had a pond?

I wondered about all these things while I waited and waited for frogs to arrive. I imagined what it would be like to see frog hopping across the lawn. I have never seen a frog in the middle of a lawn. Have you?

Then one day, I saw a flash of movement and heard something plop into the pond. Then I heard a second plop. Was it possible that not just one, but two frogs had come to my pond? Indeed it was!

from Frog Travelogue, available for purchase on Amazon and Etsy. 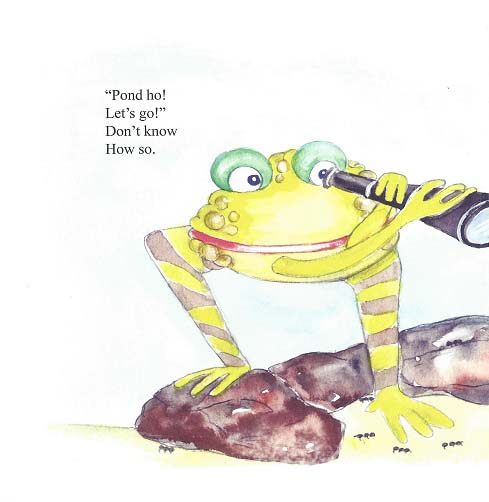 What Carol says about WordPlay

“I don’t remember how Maureen’s marketing net caught me, but I am so glad it did. My first class was the micro-essay, definitely my genre, but until I heard of the class, I didn’t know the genre existed. I enjoyed being with other writers, had never done so before. The atmosphere was supportive, the class structured and non-threatening.

Thus encouraged, I dove into a longer “Under Construction” class, where some of my classmates were working on all kinds of long-term projects. Others were submitting their writing to magazines and we celebrated when their work was accepted. I remember speech pathologist Kathy Gruhn’s project in particular, because she succeeded in a complex project about child development that I continue to be interested in.

I was in a hiatus in my life, and this group became my support group. Even though I have moved from Charlotte, I continue to be interested in the achievements and goings-on of these fellow writers. I learned to appreciate the many different writing talents represented by these women. And I was pleased to see that Kathy Gruhn had taken the time to write a review of my children’s book on Amazon (Maureen must have told her about it), so the feeling is mutual. Very gratifying.

My immediate take-away was a better understanding of the writing process, and the many ways to add structure to it. Maureen’s book is worth in weight in gold to help with that! I also now have a collection of micro-essays that will be a book one day. It has been lots of fun to self-publish my first children’s book. It was a practice book for another, longer one that it has been my goal to publish for a long time.

Maureen is a wonderful resource for all kinds of information about writing, publishing, and about how to live your dreams. Her incredibly hard work and sharing of her own journey were perhaps most inspirational of all.

I am glad Maureen inspired me to invest in myself. Ten years later, I am reaping rewards that I expect to continue far into the future. Step into Maureen’s world and enrich your personal journey in ways unforeseen!”