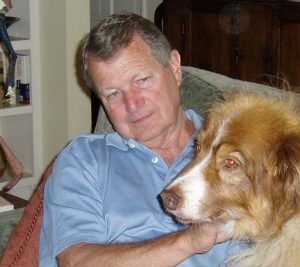 Ben Romine enjoys life in the foothills of western North Carolina. He writes, hikes, reads, sees a few clients, fishes, works wood, and assists his wife, Jan, in tending a menagerie of dogs, cats, rescued horses, and a parrot who hates him. Before retiring, he was a university administrator and after that, a psychotherapist. His spread is aptly named Rancho Neurotico!

His formal education included stops at Carson-Newman College, Florida State University (B.A.) and Duke University (M.A. and Ph.D.) A year at Duke Divinity School revealed that the answers to his questions were not be to be found in books.

More practically, his education occurred in venues as rich and diverse as south Georgia athletic fields and courts; a counseling office in Charlotte, NC; the forests and mountains of the Appalachian Southern Highlands; confrontations and connections in and around the Pine Ridge Indian Reservation; and countless tables surrounded by wise and trusted friends both very late at night and, recently, in more sedate lunch venues.

The seeds of the story grew out of a life-long fascination with the culture of the plains Indians that was triggered by the pictures in his earliest favorite book (now in the safe-keeping of his grandson). But it led inexorably to a deep appreciation of the People themselves—their courage, cultural strength and the profound spiritually that continues to nourish and undergird so many.

A Sample of Ben’s Writing

Root of the Sacred Tree

Montana was not his destination when he fled Charlotte, North Carolina. At the time, he had exactly nothing in mind except getting out. Away. The direction and endpoint didn’t matter. Only just Far.

Nor could he identify the moment he decided to return to Big Sky Country. It could have been somewhere in Tennessee, or East Arkansas—or maybe during the second day. At some point, though, it occurred to him to revisit the spot where he and Laura had shared some of their finest, most cherished moments.

A brief stop…touch it and move on. That was his thinking as he drove hard on the third day toward Bozeman and then beyond to the village of Ennis.

But what started out as lunch at the Ennis Cafe and a nostalgic stroll down Main Street turned into six weeks and a serious reconnection. Too many memories to shake easily.

There had been tight lines and beautiful fish. Riffles and whitewater. The unexpected thunderstorm that had rolled in from above the pasture, catching them both by surprise and drenching them down to their last fiber. The Big Sky, which to him at the time seemed minuscule compared to her energy and the effect it had on him. Love and moisture.

So 15 years later, he returned to O’Dell Creek and set up camp exactly where they had pitched their tent and spent their honeymoon. For the first ten days, he didn’t leave except once for groceries and again to escape a blue norther that swept through.

He fished some. But mostly he recalled conversations and how her breasts felt against his back when she held him in the sleeping bag at night. The way her laugh sometimes started in her nose, and how her thigh rested on top of his. He didn’t just let the memories come—he ransacked his mind for them, abandoning himself at last to his grief.

His first week back on O’Dell was Hell. A total blur.

But at some point during the second week, his tears became less toxic, and he actually began to smile at some of his recollections. The time she had slipped a trout into his side of the sleeping bag. The morning she had substituted worms, complete with dirt, for the flies he had so carefully tied the night before.

Then, by the beginning of the third week, the waters of the creek began to rise again, not only in the creek itself, but in his soul. By week four, he was Home. And after week five, he felt that he had retired the mortgage and owned the place. Laura was never far from his mind; he “talked” with her from time to time during the day. But he was beginning to experience a joy he’d almost forgotten.

from Root of the Sacred Tree

What Ben says about WordPlay

“I’ve enjoyed writing for as long as I can remember but I never took it seriously. My papers in college and graduate school were generally well received, and I enjoyed a reasonable degree of success in publishing academic papers. But I never faintly considered myself A Writer.

But one day, just as the managed care industry was squeezing the joy out of practicing psychology, a friend in the film/theater business dared me to try to write a screenplay. It was a disaster. I don’t particularly enjoy most movies and I certainly didn’t know anything about writing a screenplay! But it gave me something to do in the evenings and after a while, some words and paragraphs began to present themselves. It didn’t happen overnight but that’s exactly how it came to feel. Things—words, thoughts, characters, conversations—just began to arrive in my mind and it was my job to record them. I forgot the screenplay and just wrote. And wrote.

Then it stopped. Nothing. Silence. I told my wife that I either had to quit the project or go to the Pine Ridge Indian Reservation in South Dakota where my imagination had led me. She gave me her blessings and I booked a ticket planning on a ten-day stay. That was the only thing I planned. I left with no agenda and no itinerary. The Guides had led me that far; I felt confident that they could handle the job.

What a trip it was! Having no questions, I received no “answers” but I discovered what the book was about. And I returned with the conviction that no matter what happened with the manuscript, the journey was reward enough.

I went through the Find-an-Agent thing and was encouraged by handwritten notes and invitations to submit more material. One asked that I withdraw the manuscript from the agent market for six months while they decided whether they wanted the project. Through it all I promised that I would never Self Publish! And I gave up, still believing that the journey was all the reward I needed. No more letters of inquiry. A long period of dormancy followed.

Then some good friends asked to read the book and began yapping at me to get it out there. And that’s how I met Maureen, the next savior/magician/splendid cheerleader. Most of you who read these words will appreciate what a fortunate event that was.

I wish no one before me had said, “If I can do it, anybody can.”! I’d like to have coined the phrase. It took a dare, some fun evenings, a trip to South Dakota, and a lot of twists and turns. And Maureen, of course! But, boy! What a trip! I’d recommend it to anybody.”