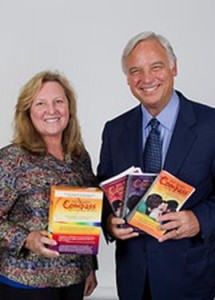 In 2006 Kathy’s writing consisted of dictated Speech Pathology notes that were very objective. No descriptive words. Strictly scientific data.  However, in her heart she knew she was a storyteller. She took Maureen’s Under Construction class in the fall and wrote a story called “Boots” about her riding boots getting stuck. Maureen asked her to read it out loud in class and she thought she was going to have a heart attack. She had no confidence. That was then…but now is now.

She has been taking the class ever since and has written a child development program, My Baby Compass, that consists of: three manuals, fourteen booklets, a CD-ROM and an app, along with marketing dialogue consisting of a blog, TV scripts, magazine articles and an e-zine.

She is now ghostwriting the story of an 85-year-old African American woman’s experience growing up in the south. She is having a blast. She’s also researching and will be writing the My Senior Compass series that will consist of three or four manuals to cover Dementia, Stroke, Traumatic Head Injury and Neurological diseases that affect a person’s communication skills. She’s including personal stories from caregivers and professionals.

A Sample of Kathy’s Writing

How Babies/Toddlers Learn to Talk

Even before your baby knows he has a voice, he hears yours. That’s the very first step of learning to talk. Babies start by babbling vowel sounds like “ah” and “eh.” Soon they add consonants to the vowel sounds. They begin to form simple words like “da,” “ma,” “no” and “go.” They get better at the four communication building blocks (reception, association, expression and memory) and are able to put more complex sounds together, forming bigger words and, eventually, combining them into short sentences as they grow.

It’s important to remember that your baby’s communication skills will improve in very small steps. You might not notice much change for a week or two, and then, all of a sudden, your toddler has two or three new words all at once. He has been developing skills all along as you have been talking and playing with him. These skills develop a little differently in every child. It’s more important that they appear in sequence than that they happen by an exact time or age.

You can buy Kathy’s My Baby Compass programs by clicking below:

What Kathy says about WordPlay

“With the support of Maureen and my wonderful classmates, I have a second career as the Positive Parenting Expert.

Having met the two most influential people in my life, Mother Teresa and Oprah, I have learned they had trials and tribulations; however, their passion and commitment to their work never waned. They are my role models. Mother Teresa’s advice to me was, “Never be mediocre, be the best at what you do, whether it is making a cup of tea or healing the world.” I have tried to follow these words, but I can’t be the best I can be at writing if I do it alone. Thank goodness I have Maureen Ryan Griffin and my Under Construction group.”