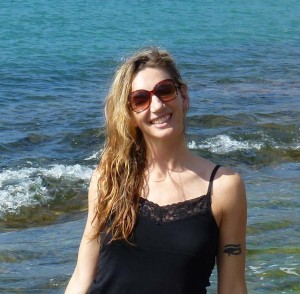 Aristotle said, “We are what we repeatedly do,” and Annie Dillard says, “How we spend our days is, of course, how we spend our lives.”  Marann spends her days writing, consulting, philosophizing, loving, traveling, reading, exercising, learning and recreating. She also likes to sing, dance, take pictures and even sometimes paint them. In general, she considers herself an explorer (in all senses of the word) with a fierce love for family and friends, just not a belief that she must live next door to them to express it.

Marann writes novels, creative nonfiction essays, feature articles, interviews, short stories and the occasional poem. She also hosts a travel blog which chronicles her nomadic lifestyle over the last three years, which took her from Nicaragua to China to Europe, as well as her observations now that she’s landed in Puerto Rico for a while.

A Sample of Marann’s Writing

I woke up this morning to the same sun, the same North Atlantic Ocean, the same hue and grit of natural sand, only I was 1,140 nautical miles north of my island and 40 degrees cooler.

On my sunrise walk of which I’ll share a grainy, dumb-phone snapped photo, I was thinking about a phrase, one I bet you can’t even read without hearing it in a particular Southern drawl.

Life is like a box of chocolates. You never know what you’re gonna get.

Did you mentally preface it with “My momma always said?” So popularized, it is difficult to speak the phrase without slipping into an imitation of Forest’s accent.Try it. It’s ingrained.

A few months ago, my parents and I were picking through a candy sampler we’d received as a gift. I’d select a shape, take a small bite, wrinkle my face at the unwelcome taste of orange crème or mint, then pass it on if Mom or Dad were willing to eat it, or toss the piece into the highway ditch if they weren’t.

We profess to suspect variety from life. We have lots of platitudes like “you never know.” There are 3,000 quotes on Goodreads tagged as “living life to the fullest.” We’re always hoping to get something else.  We’ll have more, make more, travel more, love more, be more…
someday. While what we actually do is reach back down and grab from the same box of life as if we know exactly what flavor we’ll grab.

That people we love won’t die, jobs we work won’t end, health we have won’t fade, friends we make won’t stray. We are shocked, indignant even when it gives us something other than the almond nougat we wanted. Why me? How could this happen?

My latest reading kick has taken me to Oak Ridge, Tennessee, in the early 1940s. Fresh-faced farm girls recruited out of high school from places like Shenandoah, Pennsylvania, and Auburn, Alabama, moved to an undisclosed location to watch dials and turn knobs for gauges which they didn’t know what controlled. The scale of operation and patriotism is unfathomable today. 75,000 people secretly living in barracks, trailers and hutments, being transported by an 800-bus fleet on 300 miles of private road, performing tasks they didn’t understand without asking questions. All that sacrifice and willingness based singularly on faith in the government’s promise: it was important to the war effort.

Can you imagine a country girl’s reaction to the first image of a person’s melting skin? Could she recognize her own fingers that for two years turned a dial she now knew helped produce atomic destruction? It may be true she was part of a top secret war project, but she’s still unprepared to wake up to a different day.

It’s impossible to say how long war would have raged or how deep the world’s psyche scarred. The morality of the atomic bomb will perhaps be forever debated. Its creation though, is an undeniable testament to what can be done when a chance is taken and believed in, and proof there are always consequences to taking chances.

We can’t go back and undo a choice no more than we seal back the bitten chocolate piece. We can’t assign reasons to why our piece turned up coconut when we wanted caramel. We can’t ever, really, know why.

What we can do is reach out, grab a piece of life, take a big bite, and see what flavor we get this time. What a waste some people might say as you try, taste, and spit out another experience. If using life is wasting it, I say waste away. Don’t leave it wrapped in foil afraid of what’s inside. The sun, the sea and sand are only the same if we leave on the lid content to admire its calligraphied surface.

In Nick Hornby’s novel A Long Way Down, a character is on her way to commit suicide when it occurs to her how silly it is to be fearful, in that particular moment, of walking in the city at night. Later she reflects, “There isn’t so much to be afraid of, out there. I can remember thinking it was funny to find that out, on the last night of my life; I’d spent the rest of it being afraid of everything.”

What Marann says about WordPlay

“When writing with Maureen, stories will emerge you didn’t know were inside of you.  Your fellow workshop participants will take risks that surprise you and shed their personalities to become authentic story tellers. You simply must experience it to realize the power of Maureen Ryan Griffin’s writing courses. She provides insightful, though-provoking prompts that encourage a variety of writing styles and types. The creative, supportive atmosphere she creates seeps in and takes hold so that her writers reach new depths and produce a different caliber of writing.  She describes herself as a “midwife of dreams” and she realizes this role in many capacities. I am grateful for working with her, writing with her, and just knowing her!”