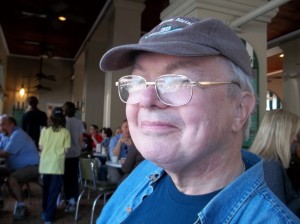 Lloyd Edwards is an Episcopal Priest, recently retired from parish ministry. He teaches religion courses at a local college and sees people in spiritual direction. Before ordination, he earned a Ph.D. in physics and did research and taught. He is married, with three adult children, six grandchildren, two above-average dogs (but don’t tell them he told you – they’re full enough of themselves already).

A Sample of Lloyd’s Writing

Brother Blunt matched his name – brusque, plainspoken, often abrasive. The other members of the monastery understood that he didn’t like people to get too close and that he distrusted feelings, his and everyone else’s. But he showed no malice, and they let him alone.

One day the Abbot of the monastery got a call from the Bishop’s secretary. The Bishop planned to visit the monastery for lunch, and he sought a spiritual director among the brothers. Everyone assumed that he would ask the Abbot to be his director, for the Abbot was widely known for his wisdom and compassion.

While the Bishop ate lunch, he spoke with every one of the brothers during the meal, weighing their value as his director. After the final blessing, the Bishop turned to Brother Blunt and asked him if he would be his director. Everyone was astounded. They had been so certain.

The Abbot was especially concerned, not that he had not been chosen, but that Brother Blunt would say something so offensive to the Bishop that he would never return to the monastery. The Abbot knew the value of staying on the good side of the local Bishop.

As soon as the Bishop asked Brother Blunt to be his director, Brother Blunt walked out the door without a word, the Bishop following. They walked into the woods, and only a few moments passed before the Bishop returned, climbed in his car, and drove away.

Six weeks later he returned. He arrived in time for lunch, and after the final blessing, Brother Blunt again walked out the door and the Bishop followed. Only a few minutes passed before he returned, climbed into his car, and drove away.

Another six weeks passed and the Bishop again came for lunch. He and Brother Blunt repeated their prior actions.

A few weeks later, the Abbot and Bishop were together at a meeting of the Diocesan Task Force on Spirituality. After the meeting, when all the others had left the room, the Abbot asked the Bishop, “How are you and Brother Blunt getting along?”

The Abbot was relieved but his discretion kept him from inquiring further. The Bishop, however, was not finished.

“The first time I met with him, the day I asked him to be my director, he walked with me into the woods. I came with eager expectation, after the manner of the Desert Fathers, where one would go to one of the old holy men and ask, ‘Father, give me a word,’ and then he would go away with the word and chew on it for months.

“We walked only a short way into the woods when he said, “I don’t know what I’m doing. I wish you would go away.” I drove back to town, chewing on what he had said. What was the Holy Spirit saying to me through his words?” The Bishop paused for breath.

“After a few days, I realized that he was telling me that I needed to get away for a while, and he was right. So I made reservations for a week-long retreat on the mountain. It was one of the best things I’ve ever done. I came back refreshed spiritually, physically, and emotionally.”

“The second time I met with Brother Blunt, he walked into the woods again and again I followed. A little way in, he turned and said, ‘I wish you’d leave me alone.’ Again I left in a spiritually exalted state. I had asked for and received a word. But what did it mean?”

“I prayed and reflected on it for several days, and then I realized what the Holy Spirit was saying to me. He was telling me that I needed more time alone. I am quite introverted, and I spend all day talking with people. I am exhausted every evening. So I scheduled an hour every day with myself, writing in my time planner just as if it was an appointment with someone else. It has made all the difference! I’m calmer and more effective, and at the end of the day I feel rested rather than exhausted. What a gift!” The Abbot moved to start back to the monastery, and the Bishop stood and walked with him.

“Last time I met with Brother Blunt, I had lunch as usual and he led me into the woods as usual. This time he said only, ‘I wish you’d go away and not come back.’ Again I meditated and reflected on his word as I drove back to town. He had told me to go on retreat before, and I had done it. Now he was adding to the message. I was not to come back.”

“What did that mean? What was the Holy Spirit saying to me through Brother Blunt’s wise words? I thought of the theme of not returning, of the angel with the flaming sword east of Eden, and how we could not go back in our life and repeat it. Life is a journey from somewhere to somewhere else. Where was my life going? I’d never thought of that. If I can’t go back, what does going forward look like?”

“I thought of the things that I’ve put off, things I’ve always wanted to do, but the time never seemed right. I was a good pianist as a kid, but I gave that up when I went to seminary. I realized I’d better do something with the time I have left, so I’ve gotten a teacher and am working on some of the shorter pieces by Brahms. It has changed my life, and I owe it all to Brother Blunt. He’s the most wonderful director I have ever seen!”

The Abbot was astonished. He knew Brother Blunt, and he knew that Brother Blunt was incapable of the kind of wisdom the Bishop had described. His curiosity overcame his usual tact. “But Bishop, he didn’t say anything like you heard! He is a brusque, reclusive man, and he was telling you just what he meant! He was telling you to go away, leave him alone, and don’t come back.”

The Bishop smiled and said, “Yes. That too. I think Brother Blunt has given me exactly what I need, and I will not need to visit him again. Please give him my regards and blessing.”

You can buy Lloyd’s book, A Place to Breathe, by clicking below:

What Lloyd says about WordPlay

“I’ve always been an avid reader and writer, and when I retired from parish ministry two years ago, I thought, “Now I have time to write. I want to be able to call myself a writer.” I had two published non-fiction books under my belt, but wanted to begin to write fiction.

I was on Maureen’s email list, and when I saw that she was offering an evening workshop in Charlotte, I went. What I discovered there was the fun, light, creative side of writing. Later I attended one of her Saturday morning workshops and it re-charged my batteries for writing. She is a superb teacher, and her acceptance of our work encouraged us to do more.

Still later, I was stuck on a novel I was attempting, and she generously read my treatment and met with me to offer comments. That meeting made all the difference, and got me unstuck. I continue to work on the novel, but had already started a non-fiction book, A Place to Breathe: Creating the World that God Intended –- and Still Does. Maureen’s reminder to take writing lightly as well as seriously, her writing prompts for getting started and her book, Spinning Words Into Gold, were invaluable. I continue to return to what I learned from Maureen, whether writing fiction or non-fiction.”